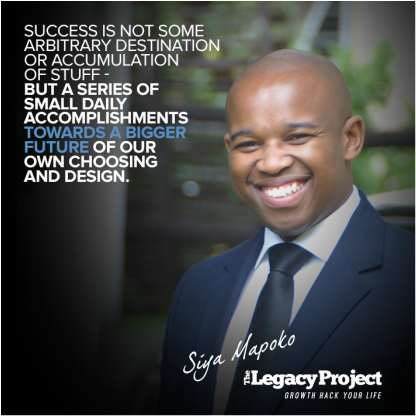 Siya Mapoko is a businessman, investor, best-selling author and speaker. He is the author of The Best Advice I Ever Got and Conversations with JSE AltX entrepreneurs. Siya is the CEO and Chief Research Officer at MRI, a boutique research and publishing agency. Millions of South Africans have seen him on various TV channels (SABC, CNBC, eNCA), heard him on more than 20 radio stations or read about him in print media. After graduating from UCT, with BSc in Biochemistry and Honours in Chemistry, Siya enrolled for MSc and was seconded to GSK in England to do drug research on Magnetic Resonance Imaging (MRI) Contrast Agents. After UCT Siya joined Investec Asset Management as an Equities Trader.

Siya has interviewed, advised and worked closely with over 250 CEOs and top executives of JSE-listed companies and multinationals. He routinely gets invited as a guest lecturer to Business Science and MBA classes, locally and abroad. As a speaker Siya has addressed diplomats from such countries as US, Belgium, France, Monaco; members of organisations such as the Institute of Directors (IoDSA); ACCA; JSE CEOs Forum and has spoken at many conferences around the world. As an entrepreneur, Siya has tested and used over 30 different ways to raise capital for new ventures. He has served on boards of companies and he currently serves on the Amy Biehl Foundation Trust board of trustees. Siya has donated over R1million worth of books to schools and youth-focused non-profits. He has been nominated for numerous business and entrepreneurship awards and in 2010 was honoured by The Johnny Walker Striding Man Society as one of 30 South African Striders.
​Click HERE to email Siya